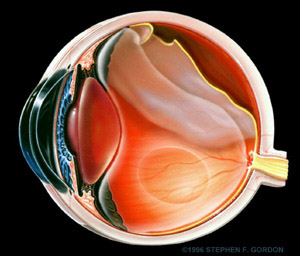 Retinal detachment happens when the retina becomes separated from its underlying blood source, the choroid.  This separation can occur as a result of a number of factors and may occur at any age.  The retina is essential for vision.  Without a functioning retina, no vision is possible.  If the retina floats free from its nutritive blood supply for too long of a time, it becomes less and less likely that vision can be restored with surgical repair.  Surgery is the only way that a retinal detachment can be repaired, either by laser photocoagulation (for small, localized retinal detachments) or intraocular microscopic surgery.  People more at risk of retinal detachment are those who are near-sighted (myopic), those who have had surgery to remove cataracts (with an even higher risk if they have also had posterior capsulotomy following cataract surgery), those who have had a retinal detachment in one eye or those who have the rare condition of Marfan’s Disease.  Detachments are more common in mature adults, as the jelly that fills the globe of the eye begins to liquefy.  This condition is called “posterior vitreous detachment” or “vitreous separation”.  As this process transpires, the vitreous that has not liquefied but remains attached to the retina can pull a tear in the retina, while the other portion of liquefied vitreous is freely mobile, causing tension on the attached portion.  The tear allows fluid to enter the subretinal space separating the retina from the choroid.

Symptoms of a retinal detachment are typically described as flashes of lightening, dark floaters increasing suddenly and eventually and a shade across a portion of the vision, ultimately blacking out all sight.  Early treatment results in best chances of visual recovery; therefore it is important to seek the help of an ophthalmologist immediately if you experience any of these symptoms.

Helen Keller Foundation researchers have developed a successful technique for preventing retinal detachment for individuals at high risk of detachment.

This illustration depicts a retinal detachment in the upper half of the drawing.  The detached retina appears pale, while the attached retina is a healthy rose to orange color.  The choroid is the layer of deepest coral exposed by the free-floating detached retinal layer. 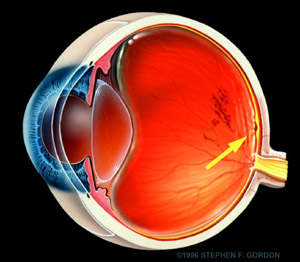 The cause of macular pucker, also known as epimacular or epiretinal proliferation, is not known.  It generally occurs in older adults and is associated with the normal aging phenomenon of poster vitreous degeneration.  When the vitreous jelly that fills the globe of the eye liquefies (degenerates), it is thought that an inflammatory response causes an aggregation of cells to form a transparent membrane-like layer overlying the retina in the macula.  This sort of scar contracts, putting stress on the underlying retina in the most critical area for detail vision.  The symptoms can be blurred, distorted vision or even double vision.  This condition may remain stable, causing only a mild visual disturbance, or it may progress, causing swelling in the macula and significantly reduced vision.  Surgery to remove the macular pucker can successfully relieve symptoms and restore vision in most cases.  However, if serious vision loss is left untreated, it becomes less and less likely that the damage can be reversed and vision restored.

Helen Keller Foundation scientists have contributed to the advancement of surgery for macular pucker that has become a commonly performed, safe and successful procedure. 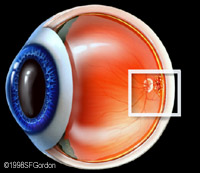 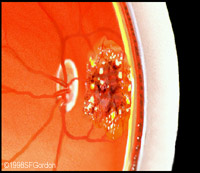 Macular Degeneration has experienced an explosion inresearch breakthroughs in the past decade, changing the entire prospect for individuals struck with the age-related retinal condition – from certain loss of vision to the potential to maintain vision for a lifetime.  Research continues at a heated level of excitement to further refine existing treatments and to introduce more successful remedies.

There are two types of macular degeneration.  The first type, known as dry age-related macular degeneration (dry AMD), is a slow progressive form.  The illustration above shows the thinning of the retina and deposits known as “drusen” in the area of most acute vision, the macula.  These changes in the retina indicate a breakdown in the cellular function of the retina and the risk of further complications known as Wet Age-Related Macular Degeneration (wet AMD).  AREDS formula vitamins have been proven effective in reducing the potential risk of progression to wet AMD in clinical studies. 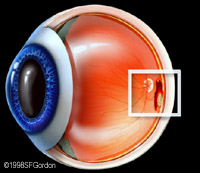 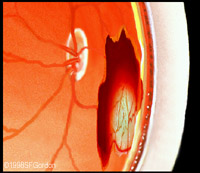 This second set of images illustrates wet AMD.  Wet AMD, as opposed to dry AMD, is distinguished by abnormal blood vessels that grow beneath the thin retinal tissue in the macula and eventually break.  The broken vessels bleed into the macula causing a sudden loss of central vision.  The vision loss may appear as a black, gray or fuzzy spot.  The spot, or “scotoma”, makes it difficult to recognize faces, read or even identify food on a plate – anything requiring central vision.  Without treatment to stop the growth of the new blood vessels and bleeding, serious loss of central vision will occur.  New drugs are available now that can restore lost vision if used promptly and can help prevent recurrences. 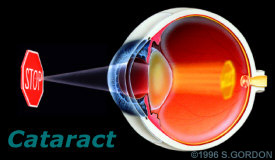 Cataracts are something almost everyone will experience in their lifetime.  As we age, the normal crystalline lens hardens and may become opaque, disrupting the transmission of light to the retina.  Vision becomes cloudy, objects are dimmer, color is yellowed and glare from light may become bothersome.  As this normal aging process advances, vision becomes worse and interferes with our ability to see, both at distance and up close.  Ongoing research is seeking prevention for cataracts, but in the meantime, highly successful surgery restores vision by removing the cataract and substituting an artificial intraocular lens implant.  Cataract surgery is the most commonly performed surgery in the United States in people over 60. 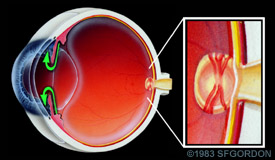 Glaucoma is the leading cause of blindness in African Americans in the United States, but anyone can have it, even children.  It is a treatable condition easily detected in an eye examination.  However, it does not produce detectable symptoms to the person who suffers from it until a great deal of irreversible vision loss has occurred.  It is sometimes associated with other conditions such as diabetes.  Simply put, glaucoma is a result of an abnormal balance in intraocular fluid exchange causing high pressure in the eye.  In the normal eye illustrated above, the fluid moves between the two areas of the eye indicated by the green arrow, maintaining a normal balance, a normal pressure.  The image below shows the fluid exchange blocked with the red arrow, resulting in a steady production of fluid entering the globe without being able to exit.  The pressure in the eye consequently expands, putting abnormal pressure on the optic nerve, shown here as very enlarged and excavated, compared to the normal nerve above.  The damaged optic nerve manifests as loss of vision in the visual field corresponding to the nerve damage.  If untreated, generally the loss initially seen in the periphery, the side vision, encroaches over time, encircling the central vision.   There are two commonly known classifications of glaucoma – open or closed angle glaucoma.

Glaucoma is a frequently explored research area that has resulted in better and more successful treatments, both with medications and surgery.

Diabetic retinopathy is the leading cause of blindness in working-age Americans.  People with both non-insulin-dependent diabetes mellitus and insulin-dependent diabetes mellitus are at risk for developing diabetic retinopathy. T he incidence and severity of the retinopathy increases with the duration of diabetes and is likely to be worse if control of the diabetes is poor.  Almost all people who have had diabetes for more than 30 years will show signs of diabetic retinopathy.  The disease is caused by damage to blood vessels of the retina, which eventually robs the retina of oxygen (ischemia).  In the earlier and less severe type (non-proliferative diabetic retinopathy), the existing blood vessels become porous and leak fluid into the retina, causing blurred vision.  In the more advanced and severe type (proliferative retinopathy), new growth of blood vessels occurs within the eye.  These new vessels are fragile and can hemorrhage, causing loss of vision. Retinal detachments can then form, leading to blindness.

Besides diabetes, patients can suffer from other diseases that affect the blood vessels in the eye.  Patients with high blood pressure are at a higher risk for developing a clot in one of the veins in the eye, called a “branch” or “central retinal vein occlusion” (BRVO or CRVO, respectively).  Often these patients develop fluid in their macula, causing vision loss, or they develop new, weak-walled blood vessels that tend to bleed easily.  These diseases also tend to affect those over 50 years old and can be partially prevented with tight control.

Back To The Eye