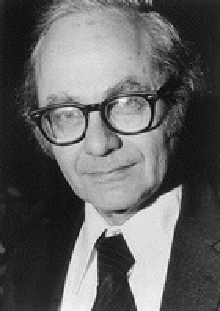 David Hubel, M.D. was born in 1926 in Windsor, Ontario. Dr. Hubel became a pharmacist and achieved some prosperity by inventing the first process for the mass producing of gelatin capsules. His were born and raised in Detroit, Michigan. His father, a chemical engineer, took a job across the Detroit River in Windsor, Ontario, became tired of commuting from Detroit, and finally moved to Canada. When he was born he acquired U.S. citizenship through his parents and Canadian citizenship by birth. (When it comes to prizes he doesn’t know whether each country gets half credit or both get full credit.)

In 1929 his father moved to Montreal, where he grew up. From age six to eighteen he went to Strathcona Academy in Outremont, and owes much to the excellent teachers there, especially to Julia Bradshaw, a dedicated, vivacious history teacher with a memorable Irish temper, who awakened him to the possibility of learning how to write readable English.

Dr. Hubel owes much of his interest in science to his father, whom he plagued with endless questions. To his mother goes much of the credit for encouraging him to work for whatever objectives he set for himself. As a boy his main hobbies were chemistry and electronics. He soon tired of the electronics because nothing he built ever worked. But with chemistry he discovered potassium chlorate and sugar mixture and set off a small cannon that rocked Outremont, and he released a hydrogen balloon that flew all the way to Sherbrooke. At McGill College he did honors mathematics and physics, partly to find out why nothing worked in electronics, but mainly because it was more fun to do problems than to learn facts. He still prefers to do science than to read about it. He graduated in 1947 and, almost on the toss of a coin, despite never having taken a course in biology he applied to Medical School at McGill. Rather to his horror he was accepted. At first he found it very difficult, given his total ignorance of biology and the need to memorize every muscular insertion in the body. He spent summers at the Montreal Neurological Institute doing electronics and there he became fascinated by the nervous system – small wonder considering that this was the period of culmination of the work of Penfield and Jasper. To his surprise he also found he enjoyed clinical medicine: it took three years of hospital training after graduation, (a year of internship and two of residency in neurology) before that interest finally wore off.

The years of hospital training were interrupted by a year of clinical neurophysiology under Herbert Jasper, who was unequalled for his breadth and clarity of thinking in brain science. On setting foot into the United States in 1954 for a Neurology year at Johns Hopkins he was promptly drafted by the army as a doctor, but was lucky enough to be assigned to the Walter Reed Army Institute of Research, Neuropsychiatry Division, and there, at the age of 29, he finally began to do research. One then had little of the feeling of frenetic competition that is found in graduate students today; it was possible to take more long-shots without becoming panic stricken if things didn’t work out brilliantly in the first few months. They were not free from financial worries, as graduate students in biology by and large are now; until he entered the army his income was close to zero, and he owed a huge debt to his wife Ruth for supporting them through those lean and exploited years of residency and fellowship training.

Scientifically, he could hardly have chosen a better place than Walter Reed. In the neuropsychiatry division David Rioch had assembled a broad and lively group of young neuroscientists, notably M.G.F. Fuortes and Robert Galambos in neurophysiology, Walle Nauta in neuroanatomy, Joseph Brady and Murray Sidman in experimental psychology and John Mason in chemistry. As in Montreal, the focus was on the entire nervous system, not on a subdivision of biological subject matter based on methods. He worked under the supervision of Fuortes. They began by collaborating for six months on a spinal cord project, and it was then that he had his only apprenticeship in experimental neurophysiology. Fuortes had a genuine feel for biology that was rare among neurophysiologists in those days. He also learned and benefited much from a most able and helpful research assistant, Calvin Henson. His main project while at Walter Reed was a comparison of the spontaneous firing of single cortical cells in sleeping and waking cats. He began by recording from the visual cortex: it seemed most sensible to look at a primary sensory area, and the visual was easiest, there being less muscle betweeen that part of the brain and the ouside world. It was first necessary to devise a method for recording from freely moving cats and to develop a tungsten microelectrode tough enough to penetrate the dura. That took over a year, but in the end it was exciting to be able to record from a single cell in the cortex of a cat that was looking around and purring.

In 1958 he moved to the Wilmer Institute, Johns Hopkins Hospital, to the laboratory of Stephen Kuffler, and there he began collaboration with Torsten Wiesel. A year later Kuffler’s entire laboratory moved to Harvard Medical School in Boston, at first as part of the Department of Pharmacology under Otto Krayer, who was largely responsible for bringing Kuffler to Harvard. Five years later, in a move unprecedented for Harvard, they became the new Department of Neurobiology. His daily contacts with Stephen Kuffler and with Edwin Furshpan, Edward Kravitz, David Potter and Simon LeVay have been both fun and enriching. During the past twenty two years, besides working with Torsten, he has collaborated briefly with Ursula Dräger, Helga Ginzler, and Ann Graybiel. At present he is working with Margaret Livingstone.

Since the age of five he has spent a disproportionate amount of time on music, for many years the piano, then recorders, and now the flute. He does woodworking and photography, own a small telescope for astronomy, and he skis and plays tennis and squash. He enjoys learning languages, and has spent untold hours looking up words in French, Japanese and German dictionaries. In the laboratory he enjoys almost everything, including machining, photography, computers, surgery – even neurophysiology.