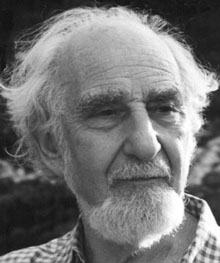 David Maurice, Ph.D. died on July 20, 2002 at 80 years of age. He was one of the most influential ocular physiologists of the 20th century.

After a physics degree from the University of Reading and a short tenure at a telecommunication laboratory of the Royal Air Force, he joined the group of Sir Stewart Duke-Elder at University College, London to pursue a doctoral degree in physiology. After completing his Ph.D. in 1951, he began his research career at the Institute of Ophthalmology at the University of London.

Dr. Maurice used the principles of confocal microscopy to invent the specular microscope and demonstrate observations of living corneal cells. This was the first use of this technique to approach in vivo biological problems in any discipline. Modifications of his original instrument are now used throughout the world to examine the living cornea. He developed the interference theory of corneal transparency, which explains why the cornea is crystal clear, transmitting light undisturbed into the optical chamber of the eye. He proposed the pump-leak hypothesis of corneal hydration which explains why the cornea maintains its size and does not swell. He introduced a novel method to measure aqueous humor flow employing the fluorescent molecule, fluorescein. Virtually everything known about aqueous flow in the eye is based on this original work using this method. It is now universally used to validate the mechanism of action of all drugs involved in the treatment of glaucoma.

His research touched many areas including eye movement, pain, tissue mechanics, myopia, and retinal detachment. He raised the most remarkable explanation of rapid eye movement sleep, long thought to be necessary for memory and dreaming. Maurice introduced the extraordinary hypothesis that the reason the eyes move during sleep is because this is needed to stir the aqueous humor in the anterior chamber of the eye behind the closed lids and thereby avoid the risk that its stagnation would cause anoxia to the cornea and consequently blindness. This is a remarkable hypothesis that surprised everyone in the field of sleep physiology.

His publications were written with clarity and brevity of a British-trained English writer. He influenced many other colleagues through informal discussions on the beach, in the bar and in the hallways. His complete freedom of spirit, coupled with a disarming wit and a total dedication to the questions that puzzled him have made him one of the unique icons of eye research.

He was the recipient of many awards, the Friedenwald Award, the von Sallmann Prize, the Prentice Memorial Medal of the American Academy of Optometry and the Diaz Caneja Award of the University of Valladolid, Spain. Virtually every major investigator of ocular pharmacology was either a pupil or collaborator of Dr. Maurice.

He was a music lover and an operatic singer, an avid tennis player and a soft spoken humorist who livened the dullest meeting. He was a remarkable model for all who were fortunate enough to work with or around him for the care, insightfulness and charm with which he approached his scientific work.