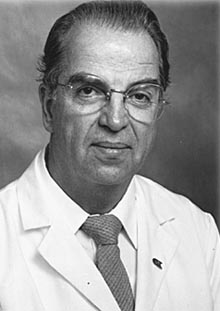 Robert Machemer, M.D. is a native of Germany who received his medical degree in Freiburg, Germany. After a residency in Göttingen, he came to the United States in 1966 for a retina research fellowship at the Bascom Palmer Eye Institute in Miami, Florida. He subsequently served on the faculty there until 1978 when he accepted the chairmanship of the Department of Ophthalmology at Duke University in Durham, North Carolina. During his thirteen year tenure as chairman, this department achieved an international reputation, especially in the field of vitreoretinal diseases and surgery.

Throughout his professional career, Dr. Machemer has pursued three major interests: 1) The study and treatment of retinal detachment and proliferative vitreoretinal diseases, 2) the development and refinement of vitreous surgery, and 3) the development of surgical instrumentation.

Dr. Machemer was the first to establish an experimental model of retinal detachment. He was thus able to study in detail the developing pathology of retinal detachment and the reversal of this pathology with retinal reattachment. He used this model to analyze a major complication of retinal detachment called proliferative vitreoretinopathy (PVR). PVR is an excessive proliferation, with membrane formation, of predominantly pigment epithelium and retinal glia derived cells. Dr. Machemer has developed surgical therapies for the removal of these membranes. In animal experiments he has shown that steroid therapy is a successful means of suppressing this proliferation. His work formed the basis of today’s understanding and treatment of this disease.

Dr. Machemer is best known for his development of pars plana vitrectomy, a surgical procedure which has revolutionized the treatment of posterior segment eye diseases during the last quarter of the twentieth century. As a result, patients who were previously hopelessly blind suddenly have a chance to have their sight restored. By employing a host of instruments and techniques which allowed surgery inside the closed eye, vitrectomy made possible the removal of diseased vitreous and intraocular scar tissue, and elegant reattachment of the retina.

Vitreous surgery is now well established worldwide, and it is no longer possible to accurately estimate the large number of patients who have been treated with this surgical technique. Commonly treated diseases include diabetic retinopathy, complicated retinal detachments with and without PVR, and severe ocular injuries.

Dr. Machemer has continued to study other eye diseases that might become amenable to surgical therapy. Most recently he has made a proposal for the treatment of age-related maculopathy, a disease that threatens millions of the elderly with legal blindness. By surgically translocating the retina and thus moving the macular area into a new position, the area of best vision can be placed on healthy pigment epithelium. This operation may allow recovery or maintenance of visual acuity. Initial successes have already been reported.