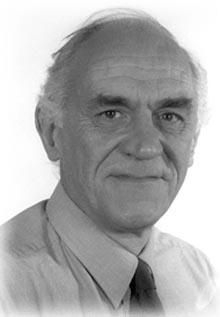 Alan Bird, M.D. was born in London, United Kingdom, in 1938. He received his medical degree from Guys Hospital, University of London, and trained in both neurology and neurosurgery before his ophthalmic residency at Moorfields Eye Hospital. He had a one-year fellowship in neuro-ophthalmology at Bascom Palmer Eye Institute in Miami, Florida with Dr Lawton Smith, and a brief period at UCSF with Dr William Hoyt.

He returned to London in 1969 and was appointed to the staff at the Institute of Ophthalmology and Moorfields Eye Hospital. He has remained there ever since, apart from a sabbatical period in cell biology with Dr Dean Bok at UCLA.

Despite his early interest and training in neuro-ophthalmology, Professor Bird reverted to the retina as his main interest in the early 1970’s, and his research has concentrated on inherited and degenerative diseases. At the Institute of Ophthalmology, he had the unique opportunity to take part in multidisciplinary work with colleagues in many applied scientific disciplines such as psychophysics, electrophysiology, specialized imaging, immunology and experimental pathology. In this research he received constant and crucial support from the numerous fellows who were attracted to the Institute of Ophthalmology in London from many countries.

Professor Bird is internationally recognized for his leadership research into inherited retinal degeneration, particularly retinitis pigmentosa. This research has embraced the precise clinical and genetic documentation of families exhibiting retinal dystrophies and the identification of the genes responsible for the retinal pathology. Professor Bird’s highly collaborative research effort has also developed novel technology to define the clinical characteristics of retinal disease. At the same time, his studies have correlated abnormal gene expression with metabolic dysfunction at the cellular level. This body of work has significantly contributed to a better understanding of degenerative diseases of the retina and impacts upon clinical management in terms of more effective genetic counseling of patients and the exploration of new treatment approaches, including gene therapy. Professor Bird is sought after for his opinion on a wide range of retinal diseases, and he is involved in a number of important clinical trials.

This work has generated over 370 papers in peer-reviewed journals and 70 book chapters. His work has been acknowledged by many institutions, receiving The Duke Elder, Doyne and Bowman medals in the United Kingdom, and the Prix Chauvin, in France. He has given named lectures including the Bjerrum Lecture in Denmark, the Ernst Custodis Lecture in Germany, the Ilmari Rendahl Lecture in Sweden, the Donders Lecture in The Netherlands, the Edward Jackson Lecture in the United States, the Jules François Lecture in Belgium, the William Mackenzie Medal in Scotland, the Wright Lecture (University of Iowa), the Jules Stein Lecture (UCLA), the Krill Memorial Lecture (Chicago), the Lang Lecture (Royal Society of Medicine), and the Clement McCulluch Lecture (University of Toronto). He has been appointed Honorary Fellow in The Royal Society of Medicine and the US College of Surgeons. He has received an Honorary Doctorate of Science from Thomas Jefferson University.

Professor Bird and his wife, Sarah, have two sons and one grandson. He enjoys playing bridge, watching Rugby Union and listening to music. He hopes to have the time to play golf regularly in the future.