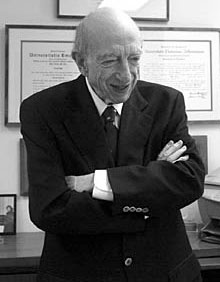 Arnall Patz, M.D., a native of Elberton, Ga., graduated from the Emory University School of Medicine, Atlanta, in 1945. He served at the Walter Reed Army Medical Center and trained at D.C. General Hospital after World War II. It was there, around 1950, that Dr. Patz noticed the strange association between incubators and the disease known as retinopathy of prematurity (known then as retrolental fibroplasias), which was the leading cause of infant blindness.

He joined the full time faculty at Johns Hopkins faculty in 1970 and founded its Retinal Vascular Center, pioneered the management and treatment of diabetic retinopathy and became director of the Wilmer Eye Institute in 1979. As director, he enlarged the clinical and research facilities and programs. At age 78, he earned a master of liberal arts degree from Johns Hopkins University.

Dr. Patz was only 32 years old when he made his first major scientific contribution, proving, despite considerable opposition from the medical establishment, that the practice of giving high levels of oxygen to premature infants was causing an epidemic of blindness in those babies. Working with pediatrician, Dr. Leroy Hoeck, Dr. Patz sought funding for what became one of the first clinical trials not just in ophthalmology but in all of medicine. His idea was to follow “preemies” routinely given high oxygen and others experimentally given lower doses. For this discovery, he was given the Albert Lasker Medical Research Award, one of the most prestigious honors in American medicine. Helen Keller presented him with the award in 1956. While in private practice and on the faculty at Johns Hopkins, Dr. Patz made important discoveries about diseases caused by abnormal growth of blood vessels in the eye and, along with his colleagues at the university’s Applied Physics Laboratory, developed one of the first argon lasers, for treating diabetic retinopathy and age-related macular degeneration (AMD), which is still used today.

He holds honorary degrees from the University of Pennsylvania, Emory University, Thomas Jefferson University and Johns Hopkins University. He remains active in medical education as a professor emeritus at Johns Hopkins and as a mentor to research scientists at Wilmer. Dr. Patz resides in Baltimore with his wife, Ellen, and has four children and eight grandchildren.