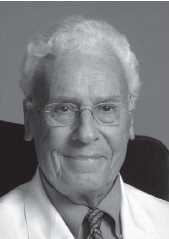 Claes Henrik Dohlman, M.D., (1922) is an American ophthalmologist of Swedish origins. He was born in Uppsala, Sweden and received his schooling in Lund. He received his M.D. degree in 1950 and then entered ophthalmology training in Lund under Professor Sven Larsson. The years 1952-54 were spent in fellowship training in the United States. Thus, for eighteen months, he worked under Dr. Jonas Friedenwald at the Wilmer Institute, Johns Hopkins Hospital, primarily on proteoglycan histochemistry. Eight months were spent at the Retina Foundation in Boston, supervised by Drs. Endre Balazs and Charles Schepens. More ophthalmology training followed back in Sweden. During the following years, Dr. Dohlman continued his interest in biochemistry of the cornea, and he finished his doctorate in biochemistry at the Karolinska Institute in Stockholm on the metabolism of the sulfated proteoglycans in the cornea. His preceptors were Professors Lennart Roden, Harry Bostrom, Sven Gardell and Thrvard Laurent. Dr. Dohlman was then promoted to “Docent” at the University of Lund.

In 1958 he received an invitation to come to Boston and work at the then Retina Foundation (now Schepens Eye Research Institute), as well as at the Massachusetts Eye and Ear Infirmary and Harvard Medical School. This was preceded by three months of training in corneal surgery in Lyon, France, under Professor Louis Paufique. After his arrival in Boston, Dr. Dohlman started the Cornea Service at the Massachusetts Eye and Ear Infirmary for clinical care of corneal patients, as well as related training and clinical research. He also started a laboratory for corneal physiology at the Retina Foundation. These activities grew substantially over the years to become a large referral service for complicated cornea patients, as well as a program for two year fellowship training and corresponding research in various aspects of corneal disease. Dr. Dohlman’s own research during this time changed from biochemistry to corneal physiology and included such problems as corneal edema and corneal nutrition. Also, a number of clinical studies on keratoplasty, corneal edema, herpetic infections and trauma were published, mostly together with fellows.

In 1968, Dr. Dohlman was appointed Assistant Professor at Harvard Medical School, in 1969 Associate Professor, and in 1974, Professor of Ophthalmology. That same year he became Chairman of Harvard’s Department of Ophthalmology, Chief of Ophthalmology at the Massachusetts Eye and Ear Infirmary and Director of the Howe Laboratory of Ophthalmology at Harvard. He stayed in these administrative positions for a total of fifteen years. During this period, there was less time for personal involvement in research, but the previously recruited clinical colleagues and scientists continued the established research lines.

In 1989, at the age of 67, Dr. Dohlman retired from the administrative positions but continued full time work with corneal patients, as well as with teaching and research. His interests gradually became more focused on the development of keratoprosthesis surgery. He and his clinical and laboratory collaborators have developed keratoprosthesis designs, surgical techniques, postoperative treatment and repair procedures to a degree that has made this procedure considerably more successful than previously. More than 4000 of the “Boston Keratoprosthesis” have been implanted worldwide. His bibliography lists over 300 publications. At this time (2010), Dr. Dohlman is still pursuing his work on a full time basis as Professor.