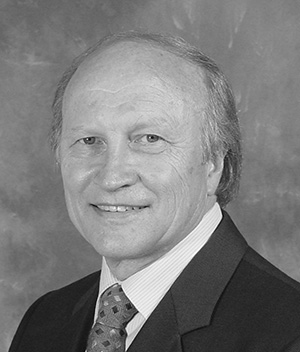 Dr. Dean Bok earned his Ph.D. Degree in Anatomy from the University of California, Los Angeles (UCLA) in 1968.  His predoctoral studies with Dr. Richard W. Young introduced him to the field of retinal cell biology, and he has been devoted to that field ever since.  Following graduation, he was appointed Assistant Professor of Anatomy at the UCLA School of Medicine and was elected to membership in the Jules Stein Eye Institute at UCLA in 1969.  He served as Associate Director of the Jules Stein Eye Institute from 1972 – 1976.  In 1983, he was awarded the Dolly Green Chair of Ophthalmology.  In addition, he currently holds the title of Distinguished Research Professor of Ophthalmology and Neurobiology at the David Geffen School of Medicine at UCLA.

Early in his career, Dr. Bok, in collaboration with his former mentor, Dr.

Richard W. Young, demonstrated that the retinal pigment epithelium (RPE) is highly phagocytic and that it participates in the daily renewal of the light sensitive portion of rod photoreceptor cells by regularly ingesting and digesting the distal portion of this light-sensing portion of the cell.  This work was performed initially with radioactive tracers in small laboratory animals (tissue autoradiography), but by extrapolation of the data to humans, it is estimated that each rod photoreceptor acquires a completely new outer segment over the course of about ten days.  Thus, rod photoreceptors renew their outer segments for the lifetime of the individual, provided that some damaging disease process such as Usher Syndrome, Retinitis Pigmentosa, Age-related Macular Degeneration or other degenerative process does not intervene.  Shortly thereafter, Dr. Bok, collaborating with his colleague Dr. Michael Hall, demonstrated that the photoreceptor outer segment renewal process is defective in the Royal College of Surgeons strain of laboratory rat, in which no RPE phagocytosis of photoreceptor outer segments was observed.  This genetic animal model of human Retinitis Pigmentosa is among the most heavily utilized in vision science.  Interestingly, although the genetic lesion is now known to be expressed in the RPE, the photoreceptor cells, through massive cell death, suffer the most serious consequence.

Another major interest for Dr. Bok has involved studies of the molecular and cellular mechanisms whereby vitamin A (retinol) is transported from the circulation into the RPE of the retina, how it is transported and processed within the RPE and how the final product of this complex series of transactions (11-cis retinaldehyde) is transported to its final destination as the chromophore of vision for rods and cones.  This effort began in 1976 when he and his colleague, Dr. Joram Heller, provided autoradiographic and biochemical evidence for a membrane receptor on the basolateral membrane of the RPE that mediates the uptake of retinol from the capillary bed of the choroid (choriocapillaris). Although controversial for 30 years, final proof was provided initially with his colleague, Dr. Hui Sun, by recombinant DNA methods and identification of the responsible gene (Stra6).  In the interim, Dr. Bok and colleagues (Drs. TM Redmond, D Hamasaki and R Crouch) provided evidence that RPE65 is required for the production of the visual chromophore for rod and cone phototransduction.  Dr. Bok and collaborators (A Ruiz and Dr. R Rando) also solved the primary structure of the enzyme, LRAT, which provides the essential substrate for RPE65, the retinol isomerase.  Final proof for the existence of a membrane receptor for retinol uptake by the RPE was provided by gene knockout studies of Stra6 in mice (with A Ruiz, Drs. R Radu, N Ghyselinck and S Nusinowitz).

Recently, Dr. Bok has focused his interest on early and late-onset forms of macular degeneration, namely recessive Stargardt macular dystrophy (STGD1) and age-related macular degeneration (AMD).  Importantly, his earlier work on photoreceptor outer segment renewal and retinoid processing has melded nicely into these studies. STGD1 is a monogenic disease whose causative gene is expressed in rod and cone photoreceptors. As shown by others, STGD1 in animal models and humans involves aberrant handling of retinol derivatives (retinoids) by photoreceptors, with bystander consequences for the RPE/choroid complex.  Due to improper trafficking of the byproduct of vision, all-trans retinal, the photoreceptor outer segments become laden with a derivative of this retinoid, which is not only toxic to the RPE but also to elements of the choroid through activation of the alternative complement pathway and inappropriate attack of complement on the RPE/choriocapillary complex.  Likewise, in some forms of AMD, due to variations in a major regulator of complement, this cellular complex also comes under inappropriate attack, again with toxic retinoid byproducts among the potential complement activators. The etiology of AMD, a multifactorial disease that includes not only complex genetics, diet, age and environmental factors in its etiology is not as amenable to study in standard laboratory animals but, by virtue of its complexity, requires a modular approach.  This has been made possible, in part by the important contributions of Dr. Bok and members of his laboratory (Dr. B Pfeffer, and J Hu) to the technique of RPE cell culture.  He and his collaborators have thus been able to study components of AMD etiology through the comparison of genotyped, cultured RPE that is either genetically predisposed or protected in the context of AMD and the identification of various triggers that initiate the disease process (J Hu and Dr. R Radu).

Dr. Bok has served on prestigious advisory boards for the National Eye Institute, Research to Prevent Blindness, The Foundation Fighting Blindness and the Macula Vision Research Foundation. He has won 11 teaching awards at UCLA, including the UCLA Alumni Association Distinguished Teaching Award, the highest teaching honor bestowed by that University.  He cherishes the interactions that he has had with students throughout his career, and he is profoundly honored to be named Laureate in honor of Helen Keller, arguably the greatest example in his lifetime of faith, hope and persistence.