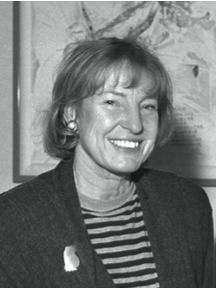 Dr. Elke Lütjen-Drecoll received the M.D. degree from the University of Marburg, Germany, in 1969.  She was trained in internal medicine and surgery before she was appointed to the Department of Anatomy, headed by Dr. Johannes Rohen. Still being a student, she had the opportunity to join the collaborative work of Dr. Rohen and Dr. Ernst Barany.  This collaboration with her teachers influenced her future decision to stay in the field of science and to support Dr. Rohen in establishing a functional view into the different fields of anatomy.

Since 1985, she has been Head of the Department of Anatomy in Erlangen/Nürnberg, Germany.  In collaboration with Dr. Barany and Dr. Paul Kaufman, she extended the studies on functional morphology of the aqueous circulatory system to the ciliary epithelium and discovered that long-term treatment with various antiglaucomatous drugs induced morphological and functional side effects.  These findings led to fruitful discussions about glaucoma therapy.  Age-related changes were evaluated quantitatively and correlated with physiological data.  These investigations became the basis for a better understanding of age-related degenerative eye diseases.

In collaboration with Dr. Douglas Johnson, Mayo Clinic, Rochester, USA, she was able to investigate the morphology of the anterior and posterior segments of donor eyes with different kinds of glaucoma, to correlate quantitative data with clinical data, thereby obtaining new insights into possible mechanisms of the pathogenesis of glaucoma.  The identification of ultra structural and immunocytochemical changes in the aqueous circulatory system and optic nerve head in glaucomatous eyes enabled searches for factors that might be responsible for the induction of glaucomatous changes.  With her group, she searched for pathogenic factors using morphological, molecular, biological and physiological methods in vivo and in vitro.  For example, they found that TGFb2 increases outflow resistance and induces changes in the trabecular meshwork similar to those seen in glaucomatous eyes, when used to perfuse eye anterior segments.

Dr. Lütjen-Drecoll’s work has been published in over 200 manuscripts and has been recognized with the following awards: