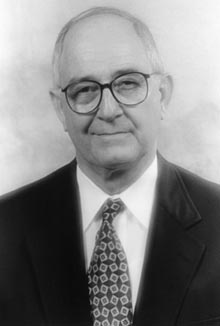 J. Donald M. Gass, M.D. was born in Montague, Prince Edward Island, Canada in 1928. He received both his undergraduate and medical degrees from Vanderbilt University, where he graduated with honors. He served his residency in ophthalmology at the Wilmer Institute of The Johns Hopkins Hospital and completed a fellowship in ophthalmic pathology at the Armed Forces Institute of Pathology.

Dr. Gass has authored over two hundred and fifty scientific articles in refereed journals and contributed many chapters to texts on ophthalmology. He is the author of five major books concerning macular diseases and intraocular tumors. He has been cited for outstanding achievement by almost all the major professional organizations in ophthalmology and by many academic institutions, both in the United States and abroad. Among these recognitions have been the AMA’s Knapp Award (1996) and Medal (1975); the Wilmer Eye Institute’s Distinguished Scientific Award (1996); the Club Jules Gonin’s Hermann Wacker Prize (1980); the Lucien Howe Medal (1983), the highest honor given by the American Ophthalmologic Society; the Award of Merit in Retina Research presented by the Retina Foundation (1986); Annual Distinquished Faculty Scholar Award, University of Miami (1989); the Donders Medal, Centennial of Netherlands Ophthalmological Society (1992); the Mildred Weisenfeld Award (1999); the Ten Most Influential Ophthalmologists of the 20th Century Award (1999); and the Alcon Research Award (2000). Dr. Gass is much in demand as a visiting professor and guest speaker, having given more than 30 named lectures and numerous scientific presentations. In 1987, the Gass Medal for outstanding contributions to the understanding of macular diseases was established by the Macula Society.

Hobbies enjoyed by Dr. Gass include model ship building, wood working, fly fishing, and gardening. He and his wife, Margy Ann, are parents of four children and five grandchildren.