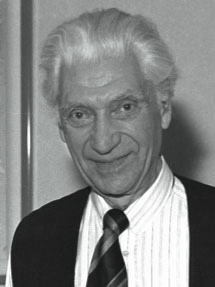 received the M.D. degree from the University of Tübingen, Germany in 1946.  He became Head of the Department of Anatomy in Marburg, Germany in 1964 and in Erlangen, Germany in 1974.  His main scientific interest has always been the functional morphology of tissues of the anterior segment of the eye, the eyelid apparatus, and the pathogenesis of glaucoma (documented in more than 300 scientific papers).  His three-dimensional reconstructions of the different functional systems of the eye, summarized in the Handbook of Microscopic Anatomy (ed. by v. Moellendorf and W. Bargmann), helped create a strong basis for scientific Ophthalmology.

Dr. Rohen’s studies on the structural differences in the outflow tissues of various species were the basis for a collaboration with physiologist and pharmacologist Dr. Ernst Barany, enabling clarification of the effect of miotics on aqueous outflow resistance.  Together with Dr. R. Witmer, Zürich, Switzerland, he was the first to analyze ultrastructural changes in the trabecular meshwork in various forms of glaucoma using trabeculectomy specimens, and he discovered the characteristic plaque-like extra cellular material deposited within the trabecular meshwork.  He was also first to grow trabecular cells in cell and tissue cultures and to analyze their synthetic capacities using biochemical methods, opening new fields of research.  Furthermore, based on scanning electron microscopic studies, Dr. Rohen developed a new theory of accommodation, now widely accepted.

Dr. Rohen’s functional view on morphology was not restricted to the eye. He introduced this view into the different fields of Anatomy and wrote textbooks on Functional Histology, Functional Embryology, Functional Neuroanatomy and Functional Anatomy.  His Photographic Atlas of Gross Anatomy is translated into eighteen languages and is also a standard in the United States.

Dr. Rohen has received numerous awards and memberships.  For example, the Albrecht v. Graefe-Prize of the German Ophthalmology Society; an Honorary Medical Doctor degree from the University of Uppsala, Sweden; an honorary membership in the German Ophthalmology Society; the Alcon Research Institute Award in 1985 and again in 1990.  He was elected a Member of the Academy of Science and Literature, Mainz, Germany and the Akademie der Naturforscher, Leopoldina, Halle, Germany.