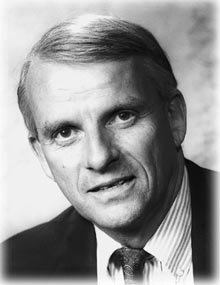 John E. Dowling, Ph.D., born in Pawtucket, Rhode Island, is currently Maria Moors Cabot Professor of Natural Sciences at Harvard University. John is an inspiring and revered leader to all in vision research, and for close to forty years, he has been one of the most influential scientists in the field of retinal research. He is, in all probability, responsible for most vision scientists being in the field today. His influence was pivotal in establishing the ARVO meeting as a basic science meeting and by his training and collaborating, at one time or another, in his lab with most of the present top-ranking people in the field of retinal research.

He is the author of 220 plus papers, three books and is also a member of the National Academy of Sciences. He is an outstanding teacher, mentor and advisor to many students at Harvard University, where in addition, he and his wife served as Masters of the Leverett House for eighteen years. In recognition of his excellence in teaching and devotion to students, he was recently honored with the prestigious title of Harvard College Professor. However, his influence in the vision research community reaches far beyond the walls of Harvard.

After graduation from Harvard University in 1957, young John spent two years at Harvard Medical School but was seduced into basic research with future Nobel Laureate, George Wald. Therefore he switched to the Graduate School obtaining a Ph.D. degree in 1961. He taught in the Biology Department from 1961 to 1964, first as an Instructor, then as Assistant Professor. In 1964, he went to Johns Hopkins University where he held appointments as Assistant and Associate Professor of Ophthalmology and Biophysics and was the bright young spark in vision research at the Wilmer Eye Institute. He returned to the Harvard Biology Department in 1971 as full Professor of Biology. He was Chairman of the Department of Biology from 1975 to 1978, and he served as Associate Dean of the Faculty of Arts and Sciences from 1980-1984.

Dr. Dowling spends summers at the Marine Biological Laboratory in Woods Hole, Massachusetts, where he founded and co-directed the Neurobiology Course for five years. He was also, for many years, a Trustee of the Laboratory and now serves as President of its? Corporation. It is also at the Woods Hole Marine Biological Labs that John Dowling spends every summer getting his hands dirty in the lab and doing many projects of note, between sailing with long-time friend and invertebrate vision researcher, Dr. Robert Barlow.

Already as a Ph.D. student in the laboratory of George Wald, John Dowling?s research work on vitamin A deficiency and its effects on the structure, electrical activity and biochemistry of the retina was highly acclaimed. His research then led to the first basic science description of photoreceptor-based retinal degeneration in an animal model. From this early, critically acclaimed research, he went on to establish just about every area of research in basic science of the retina and to leapfrog retinal research into the forefront of neuroscience. His many contributions and directions of research have made him the most prolific and important thinker in vision research today, for both clinical aspects encompassing the basic cause of retinal degenerations and the basic science aspects of understanding the functioning of the normal vertebrate retina.

His research achievements include comparative retinal anatomy and his classic electron microscopy studies in synaptic circuitry of the vertebrate retina. The vision research community all know the famous John Dowling drawings of the organization of the vertebrate retina. With Frank Werblin, he pioneered the use of intracellular recordings and staining to understand light responses of all the retinal neurons. He has always been a biochemist at heart and has directed research to understand the pharmacology of synaptic transmission in the retina and encouraged molecular biological approaches to discover GABAp receptors in the retina. Most recently, he and students have been looking at zebrafish models of development of the retina.

The whole field of studies on animal models of the blinding disease of retinitis pigmentosa owes a great deal to the original work by John Dowling and Richard Sidman. John?s continued interest and influence on this area is evident by his many years of service to the Retinitis Pigmentosa Foundation, now Foundation Fighting Blindness. He is also on the Board of Directors of the Alliance for Vision Research and Advisory Boards for Research to Prevent Blindness and the Knights Templar Eye Foundation, and he has directed the Scientific Review Board for Fight for Sight, Inc. for many years. Among the many honors and awards that Dr. Dowling has received over his career, the following stand out: Friedenwald Medal, Association for Research in Vision and Ophthalmology in 1970; Eldridge Green Lecturer, Royal College of Surgeons of England, 1971; Trustee, Marine Biological Laboratory, Woods Hole; Member of the National Academy of Sciences, 1976-; Guggenheim Fellow; M.D. (honorary) University of Lund, Sweden, 1982; Alcon Research Institute Award, 1986; Prentice Medal, American Academy of Optometry, 1991; Von Sallman Prize, 1992; and the Taylor Smith Orator, New England Ophthalmological Society, 1993.

Dr. Dowling is the proud parent of three children, Christopher, Nicholas and Alexandra and has a charming and talented wife, Judith, who has kept them in oriental art treasures for many years through her Asian Art Gallery.