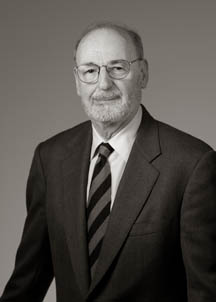 Dr. Joram Piatigorsky received a Ph.D. degree in developmental biology and chemistry in 1967 from California Institute of Technology. His postdoctoral studies with Dr. Alfred J. Coulombre at the National Institutes of Health on lens and crystallins introduced him to vision research. He remained at NIH where he is Chief of the NEI’s Laboratory of Molecular and Developmental Biology, which he founded in 1981.

During his early research on chicken lens fiber cell differentiation in tissue culture, Dr. Piatigorsky and colleagues produced the first crystallin cDNA and genomic clones (for delta-crystallin); they went on to characterize numerous other crystallin genes and related a beta-crystallin gene structure to the known protein structure. The Piatigorsky laboratory demonstrated the importance of ionic balances, often disrupted in cataracts, for crystallin synthesis. They were among the first to recognize different, ubiquitously expressed proteins, often enzymes, as lens crystallins in different species of vertebrates and invertebrates (i.e. taxon-specificity of crystallins). Dr. Piatigorsky’s laboratory identified the first crystallin promoter (for alphaA-crystallin) and used it in collaborative studies to initiate genetic engineering in the visual system in transgenic mice. The alphaA-crystallin and other crystallin promoters isolated by the Piatigorsky laboratory continue to be employed worldwide to investigate lenses. They discovered the roles of Pax6 and other transcription factors as well as numerous DNA control elements for crystallin gene expression. Using squid, octopus, scallop and jellyfish, Dr. Piatigorsky and colleagues learned much of what is known today about crystallins and crystallin gene expression in invertebrates. Piatigorsky’s extensive studies have unified the diverse crystallins at the molecular level of lens-specific gene expression and established the critical role of convergence during their evolution.

Studies from Dr. Piatigorsky’s and other laboratories established that the cornea, like the lens, accumulates multifunctional, taxon-specific crystallins that are also expressed in other tissues. His corneal studies led to the isolation of the first corneal-specific promoter (for aldehyde dehydrogenase 3a1). He has extended the notion of corneal crystallins and put forth the “refracton hypothesis,” postulating that the lens and cornea have much in common, including the use of crystallins for their optical properties. He proposed that basic and clinical researchers consider the lens and cornea as a single optical unit which he called the “refracton.” He has recently supported this view in collaborative experiments by demonstrating cataract formation in transgenic mice lacking the gene for its major corneal crystallin, aldehyde dehydrogenase 3a1.

The Piatigorsky laboratory coined the term “gene sharing” to describe the phenomenon exhibited by crystallins of having distinct molecular functions sharing the identical gene. Dr. Piatigorsky expanded the concept of gene sharing to a general evolutionary process and elaborated on its basic and medical implications in a recent book (Harvard University Press, 2007).

Dr. Piatigorsky has published 232 scientific articles and 63 reviews and chapters. He was elected a Fellow of the Advancement for the Association of Sciences (1982), has served on many national and international review panels and scientific advisory boards, and was a trustee and Vice President for ARVO (1986-1991) and a trustee for the Whitney Marine Biology Laboratory, University of Florida (1993-1998); in addition, he has been on the editorial boards of 7 scientific journals. Among his recognitions and named lectureships are the NIH Director’s Award (1978), the Jonas S. Friedenwald Lecture (1986), the First Han Bloemendal Lecture Award (1986), 2 Alcon Research Institute Awards (1985, 1991), the Sydney Futterman Memorial Lecture (1987), the Tenth Annual Neurochemistry Lecture (1988), the G. Burroughs Mider Lecture (1991), the Donald P. Abbott Memorial Lecture (1992), the Frederick H. Verhoeff Lecture (1993), the Robert R. Kohn Memorial Lecture (1993), the V. Everett Kinsey Lecture (1995), the Joseph M. Bryan Lecture (1997), the Russell Marker Lectures (2002), and the Jin H. Kinoshita Lecture Award (2005).

Dr. Piatigorsky has been an active teacher. At NIH he taught developmental biology and served as Chairman of the Department of Biology and Genetics, Foundation for Advanced Education in the Sciences (1974-1987). He was a Visiting Professor at Union Medical College in Beijing (1987), a Welcome Visiting Professor at the University of Louisville (1992), and a mentor and thesis advisor for a dozen graduate students and many more postdoctoral fellows. Many leading scientists were introduced to the eye and/or trained in his laboratory. He has played leading roles in promoting eye research from the vantage point of its genes (one example is organizing the UCLA Symposium on Molecular Biology of the Eye: Genes, Vision, and Ocular Disease; Alan R. Liss, Inc., 1988) and in using the eye as a general model for molecular biology, gene expression and evolution.

Dr. Piatigorsky expresses special pride to be associated with the remarkable Helen Keller by receiving the Prize in her name.