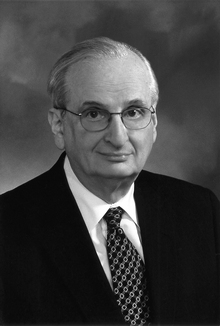 Judah Folkman, MD, is the founder of the field of angiogenesis research. He has made seminal discoveries on the mechanism of angiogenesis which have opened a field of investigation now pursued worldwide.
Dr. Folkman’s hypothesis (1971) that solid tumors are angiogenesis-dependent initiated studies of angiogenesis in tumor biology and in disciplines as diverse as developmental biology, ophthalmology and dermatology.
His laboratory reported the first purified angiogenesis molecule, the first angiogenesis inhibitor and proposed the concept of angiogenic disease. All of these discoveries have been translated into numerous clinical trials. Angiogenesis inhibitors are now approved by the FDA in the U.S., and in 28 other countries.
Largely because of Dr. Folkman’s research, the possibility of antiangiogenic therapy is now on a firm scientific foundation, not only in the treatment of cancer, but of many non-neoplastic diseases as well, including diseases of the eye.
Dr. Folkman’s exceptional achievements have been recognized by many national and international awards. In 1990, he was elected to the National Academy of Sciences. He is also a member of the American Academy of Arts and Sciences, the American Philosophical Society and the Institute of Medicine.
In addition to his distinguished accomplishments in research, Dr. Folkman has served as a surgeon and teacher. He began his career as an Instructor in Surgery for Harvard’s Surgical Service at Boston City Hospital, was promoted to Professor of Surgery at Harvard Medical School, and became the Julia Dyckman Andrus Professor of Pediatric Surgery in 1968. From 1967 he served as Surgeon-in-Chief at Children’s Hospital Boston for 14 years.
Dr. Folkman is also a Professor of Cell Biology at Harvard Medical School and is currently the Director of the Vascular Biology Program in the Department of Surgery at Children’s Hospital. He holds honorary degrees from 16 universities and is the author of 404 original peer-reviewed papers and 109 book chapters and monographs.