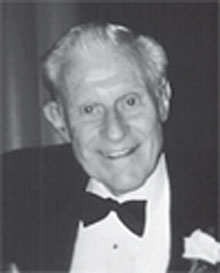 Lorenz Zimmerman, M.D., Chairman Emeritus, Department of Ophthalmic Pathology, is a revered figure in the world of ophthalmic pathology and clinical ophthalmology. For close to fifty years, this native Washingtonian has brought honor to himself and the Armed Forces Institute of Pathology for his remarkable achievements in ophthalmology.

During his career he has authored or coauthored over 370 scientific publications, including Ophthalmic Pathology, considered the definitive text in the field; received over 25 international awards and honors; and delivered over 50 special lectures.

Dr. Zimmerman, who excels at the art of clinicopathologic correlation, has made important contributions to our understanding of the behavior of almost every neoplasm, inflammation, degeneration and developmental malformation that affects the eye and its adnexa. Without the aid of modern immunohistochemistry, he was the first person to describe phacomatous choristoma of the eyelid, correctly identifying this tumor as having been derived from ectodermal cells of the skin that normally are destined to develop into the crystalline lens of the eye. To honor his discovery, some ophthalmic pathologists refer to this as the “Zimmerman Tumor.”

In 1990, on the occasion of his 70th birthday, The American Journal of Ophthalmology devoted a special edition to him. “We have to go back a long time to find another nonophthalmologist who contributed as much to clinical ophthalmology as our Zim,” said an accompanying editorial. “Zim is not only a superb pathologist who knows a great deal about ophthalmology and a spendid investigator, but also a great teacher and lecturer. Practically all American ocular pathologists under 50 years old are directly or indirectly his pupils. Additionally, Zim trained the cream of ocular pathologists in South America, Europe, and Asia. His lectures are characterized by the logic of his presentation, the clarity of his thought process and the eloquence of his rhetorical gifts.”

Lorenz E. Zimmerman received his undergraduate and medical degrees from George Washington University. He completed his internship at Gallinger Municipal Hospital, Washington, DC, in 1946, and from 1947 to 1950 served his residency in pathology at Walter Reed Army Hospital. He later served as commanding officer of the 8217th Mobile Medical Laboratory in Korea from 1950-1951 before being assigned to AFIP as a military staff pathologist in 1952. By the time his military career ended in 1954, he had become Chairman of the Department of Ophthalmic Pathology, a position he held until retiring in 1983. Today, he continues to practice as the departmentÕs Chairman Emeritus, holding a weekly teaching conference and conducting an annual week-long ophthalmic pathology course.

Dr. Zimmerman has served on the medical school faculties of Georgetown University, George Washington University, Johns Hopkins University and the Uniformed Services University of the Health Sciences, and is a consultant in ophthalmic pathology at the Washington Hospital Center. From 1975-1983, he also served as Associate Chairman of AFIPÕs Center for Advanced Pathology. He is the recipient of numerous awards and honors from universities, societies, institutes and foundations around the world for his contributions to ophthalmology, and is an honorary member of the ophthalmological societies in five nations. Among the many honors bestowed upon him during his career, several stand out: an honorary Doctor of Science degree awarded by the University of Illinois; delivering the Sir Norman McAlister Gregg Memorial Lecture in Brisbane, Australia and the Sir William Bowman Lecture to the Ophthalmological Societies of the United Kingdom, London; receiving the Ernst Jung Prize for Medicine, Hamburg, Germany; The Leslie Dana Gold Medal, St. Louis Society for The Blind; The Jules Stein Award, Research to Prevent Blindness, Inc.; and The Lighthouse Pisart Vision Award, New York.

Very recently the American Society of Cataract and Refractive Surgery conducted a global survey of 33,000 ophthalmologists in two rounds of voting to select ten individuals to honor as The Ten Most Influential Ophthalmologists of the Twentieth Century; Dr. Zimmerman was one of them. Dr. Zimmerman and his wife Anastasia are the parents of six children, Spencer; Patricia Kloke; Brian; Mary Louise Collins, MD; Barbara Reese; and Lorenz Jr., and they are very proud of their ten grandchildren.