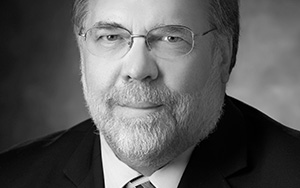 Robert W. Massof received his B.A. in Experimental Psychology at Hamline University in 1970 while working at Honeywell Systems and Research in psychophysics and electrophysiology of primate color vision.  His undergraduate honors thesis was on electroretinographic evidence of a cone system in the rat.  Massof received his Ph.D. in Physiological Optics from Indiana University in 1975 where he was an Ezell Fellow.  While at Indiana, he studied the psychophysics of color vision with Gordon Heath, Johannes Vos and S. Lee Guth.  He conducted his dissertation research with Guth, studying color vision at very low light levels.  Massof then trained in clinical vision science with Louise Sloan as a postdoctoral fellow at the Johns Hopkins Wilmer Eye Institute and in theoretical psychophysics with Joseph Bird at the Johns Hopkins Applied Physics Laboratory.  His work with Guth and Bird led to being elected a Fellow of the Optical Society of America in 1984, an honor reserved for 10% of the Society’s members.  After his postdoctoral fellowship in 1976, he was appointed to the ophthalmology faculty at the Johns Hopkins University School of Medicine and named Head of the Laboratory of Physiological Optics at the Wilmer Eye Institute.

Over the next 15 years, Massof progressed through the academic ranks at Johns Hopkins, being named Professor of Ophthalmology in 1991 and Professor of Neuroscience in 1994. During that period, he was investigating the pathophysiology and natural history of retinal degenerations, employing psychophysical, electrophysiological and noninvasive imaging methods.  He and his collaborator, Daniel Finkelstein, discovered two phenotypes of retinitis pigmentosa (RP); one characterized by early diffuse rod function loss followed later by a progressive regionalized loss of cone function; the second characterized by a later onset regionalized and progressive concomitant loss of rod and cone function.  Massof and his colleagues were the first to use the ERG intensity-response function to separately measure retinal sensitivity loss and response amplitude compression in RP.  By following a large cohort of RP patients annually over a decade, Massof and his collaborators discovered that visual field loss in RP follows an exponential decay function with the same time constant for all types of RP, but with differences between patients in visual field loss onset age.

In 1988, with strong encouragement and support from Arnall Patz, Massof began shifting his interest to the study of how visually impaired patients can improve their ability to function.   He began working with Lions Clubs in Maryland, Delaware and the District of Columbia to help form the Multiple District 22 Lions Vision Research Foundation and help raise an endowment to create and support the Lions Vision Research and Rehabilitation Center at the Johns Hopkins Wilmer Eye Institute (Lions Vision Center).  The Lions Vision Center was dedicated in 1991, and Massof was named Director.  In the same period, Massof initiated a collaborative project with NASA, the VA Rehabilitation Research and Development Service and private companies and investors to develop, test and successfully commercialize the Low Vision Enhancement System (LVES).  The LVES (“Elvis”) was the first head-mounted video system to aid the visually impaired.  This work received worldwide publicity over several years and was recognized with numerous awards, including theEye Care Technology Life-Time Achievement Award, the Popular Mechanics Design and Engineering Award, the NASA Award for Excellence in Technology Transfer and a year-long exhibit at Epcot Center as an honoree of Discover Magazine.

The LVES project made it clear that the delivery of low vision services needed to emphasize rehabilitation.  A low vision rehabilitation service delivery model emulating rehabilitation medicine needed to be developed and integrated into the U.S. health care system to secure Medicare coverage.  In 1995, Massof and his colleagues at the Lions Vision Center spelled this model out in a policy paper that was introduced by an editorial saying “This issue is dedicated to one article that history will show to be one of the major steps toward the recognition of low vision/vision rehabilitation services as a customary and integral part of the health care programs in the United States.”  The Health Care Financing Administration (now called CMS) distributed this policy paper to all Medicare Carrier Medical Directors, which resulted in changes in local coverage policies for low vision services. The issues raised by the paper became the subject of a book edited by Massof and Lidoff that was published in 2001.  Ultimately, this policy paper guided the development of the 2002 CMS Program Memorandum that mandated coverage of low vision rehabilitation services nationwide.  This policy work was recognized with distinguished service awards from the American Optometric Association and the American Public Health Association and with the William Feinbloom Award from the American Academy of Optometry.

In 1995 and 1998, Massof published two papers laying out a clinical research agenda and describing a systems model for low vision rehabilitation.  The issue being addressed was how to measure the effects of low vision rehabilitation so that meaningful clinical research could be conducted.  Over the next 15 years, Massof devoted much of his effort to the development and testing of scientifically rigorous outcome measures based on the Rasch measurement theory.  He collaborated extensively with Joan Stelmack at the Hines VA Blind Rehabilitation Center, a collaboration that resulted in the development and validation of the VA Low Vision Visual Functioning Questionnaire (VA LV VFQ) and two major clinical trials on low vision rehabilitation – the Low Vision Intervention Trial (LOVIT), which evaluated effects of rehabilitation on legally blind veterans,  and the recently completed LOVIT 2, which evaluated the effects of rehabilitation on veterans with less severe forms of low vision.  Massof developed, validated and calibrated the Activity Inventory (AI), an adaptive visual function rating scale questionnaire that identifies patients’ rehabilitation goals and provides measures of low vision patients’ functional ability.  The AI has been used in several clinical studies of low vision and intervention throughout the world. Recently, the AI was used in a study to help gain FDA approval of the Argus II prosthetic vision system.  Massof collaborated with Barry Rovner at Thomas Jefferson University on two clinical trials that employed the AI to evaluate the effects of behavioral intervention and rehabilitation on functional ability and depression in low vision.

Over the years, Massof’s work has been supported by the National Eye Institute, National Science Foundation, VA Rehabilitation Research and Development Service, both local and international Lions foundations, Reader’s Digest Partners for Sight Foundation and several other private foundations and companies.   Massof’s low vision research has been recognized with the Alfred W. Bressler Award in Vision Science, the Pisart Vision Award and the Alcon Research Institute Award.  In 2012, his work with the Lions and his contributions to low vision were recognized by the White House with a Champion of Change Award.  Massof is a Lion himself, and the Helen Keller Prize for Vision Research has special significance to him and all Lions because in 1925, it was Helen Keller who challenged the Lions to become “Knights of the Blind”.