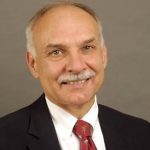 Dr. Thaddeus (Ted) P. Dryja is a Professor of Ophthalmology at Harvard Medical School and the
Massachusetts Eye and Ear Infirmary. Dr. Dryja is a 1972 magna cum laude graduate of Yale College (BA,
chemistry) and a 1976 graduate of the Yale University School of Medicine (MD). From 1976-1983, he
completed an internship in medicine (Waterbury Hospital, Connecticut), a residency in ophthalmology
(Massachusetts Eye and Ear Infirmary) and fellowships in ophthalmic pathology and molecular genetics
(both at Harvard Medical School).
In 1983, he joined the ophthalmology department faculty at the Massachusetts Eye and Ear Infirmary
and at Harvard Medical School. From 1983-2006, he led a research team studying the molecular
genetics of hereditary eye diseases while concurrently practicing general ophthalmology and ophthalmic
pathology. In 1992, he became the director of the David G. Cogan Pathology Laboratory at the
Massachusetts Eye and Ear Infirmary, and in 1993, he became the Cogan Professor of Ophthalmology at
Harvard. In 1996, he became a member of the U.S. National Academy of Sciences.
His research discoveries include finding compelling evidence for the recessive nature of oncogenic
mutations at tumor suppressor genes like the retinoblastoma gene, the identification and cloning of the
retinoblastoma gene, and the identification of 16 different genes responsible for retinitis pigmentosa
and other forms of retinal degeneration and retinal dysfunction.
In 2006, Dr. Dryja joined the Novartis Institutes for Biomedical Research where he was the Global Head
of Translational Medicine in Ophthalmology (2006-2009) and then the Vice President and Global Head of
Ophthalmology research (2009-2017).
In 2017, he retired from Novartis and returned to Harvard. He currently works as an attending eye
pathologist in the Cogan Eye Pathology Laboratory at the Massachusetts Eye and Ear Infirmary.